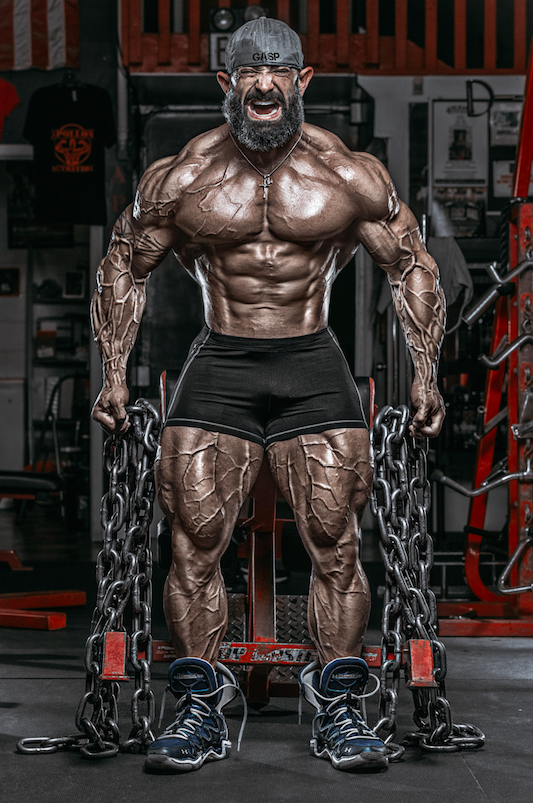 Growing up I was always infatuated with guys with muscles, plain and simple. So many people say it started when they saw Arnold or Franco, that’s not how it was with me. My father was the first “Guy” I remember having muscles that I admired. My father was always jacked man, growing up my father played football from pop warner through college, as well as boxing on the side. I remember as a child admiring my father’s arms. So many times he would put both his hands on his head and make his biceps move one at a time and I thought it was the coolest thing in the word. I too wanted to have arms like that one day, I wanted to be just like my dad. Growing up I started to really follow WWF wrestling and one of the guys I wanted to look like was the “Ultimate Warrior” he was big and shredded, and was covered in veins from head to toe, that was the look I started to admire as time went on. As I grew up and started playing pop warner football myself which was by the 3rd grade, I was a small kid to say the least and that stayed true until the day I stopped playing football. As time went on and I grew older I realized that I had to do something to make up for my lack of height and weight, if I couldn’t be the heaviest guy on the field or the tallest, I had to be the strongest, I had to be so strong that nothing else mattered and I did just that. 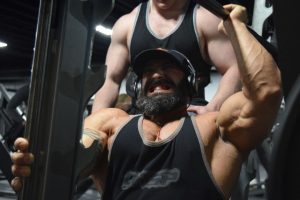 My father bought me my first weight set when I was in the 7th grade, it was one of the sets that had the sand filled weights, and in our two car garage where we butcher deer during deer season we made a little gym for me with odds and ends we had laying around. We made a lat and triceps pull down, and with the weight set I had a flat and incline bench, leg extension and ham curl machine, and little bars I could change the weights as I saw fit for my workouts. Every day I could come home from school, crank up the Rocky soundtrack and workout, the only thing I had to follow were the Flex and MD magazines I bought along with the Weider Principle book. As I grew out of the homemade weight set, it was time to start high school football therefore I was able to train at the school’s gym which was like a Mecca to a young teenage kid who never trained at a gym before. As high school went on and my football skills were getting better and better, my love for training and bodybuilding were growing as well.

After high school football I got recruited to play a bunch of different D2 and D3 colleges, I made my decision to play at Western Connecticut State University, where I was recruited to play running back, because all my career as a football player I was a running back and middle linebacker. After getting red shirted as a 160lb freshman, I hit the gym like a maniac and put on almost 20lbs and came back the following year at almost 180lbs. I played football throughout college and although I loved playing football because at the end of my career it was a fifteen year long run, I was falling more and more in love with working out and one day competing. Although I wanted to compete and be like the guys in the magazines, I didn’t even know how to diet to get a six pack let alone to get shredded for a bodybuilding show, but as fate has it, everything happens for a reason.

I finally got convinced to compete in 2003 during the summer time before having to go to college football camp. Nine days before the show in NJ I was prepping for I received an email that the show was canceled due to lack of competitors. I remember sitting in front of my computer thinking “do I go to McDonalds now?” I had no idea what to do, so instead I did research and found a show on the same day in West Virginia, I paid 1300 dollars to get my Bronco II fixed up and my cousin and I drove nine hours there to compete in my first ever bodybuilding show. I won the my novice class, the novice overall and my open class, but lost the overall in the open division to current IFBB PRO Fred Smalls. After that show I fell in love with the sport, I loved the training, the self induced torture of it, and the fact that not a lot of people could do what I just accomplished what a feat in itself, and I loved every second of it. Sure I had scored touchdowns, sack quarter backs, made game winning plays, but nothing and I mean nothing gave me the same thrill as standing on that stage and having all eyes on you as you display your master piece that you etched out from weeks of endless dieting, cardio, and training.

After that show, I never wanted to stop competing, I still had two years left of football and I gave every season my all, but after every practice I was the one in the weight room training my ass off because I knew after football was over I wanted to pursue bodybuilding. 2003-2007 came and went pretty fast I did a few local shows but my break out year was in 2007 when no one knew who I was and I came into the Metropolitans in NYC smoking my class and two weeks later winning my class at the Jr USA’s. That same year in 2007 I did my first pro qualifier and took 2nd to 212 standout Jose Raymond. After that year I took a full year off and came back guns blazing and won the 2008 Nationals with a perfect score earning my IFBB PRO CARD.

From that point on things that I would have ever dreamed of has happened to me. I won my first pro show in 2011, got my first major sponsor BSN, and competed at the Olympia twice already going on my third time in four more weeks. Not only is this a testament that no matter what you put your mind to anything is possible, but as long as you have the 3D’s which I call it Determination, Dedication, and Drive you can accomplish anything. I will end this with a quote I said back in 2008 getting ready for nationals, there are a lot of jealous people out there, whether its family, friends, or fans of the sport, there will always be people that are jealous of you, wish they had what you had and will put you down to make themselves feel better so “To anyone who every tells you that you can’t do something, tell them to go F**K themselves!“