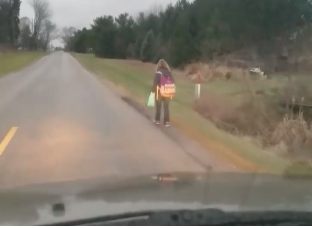 One Ohio father has parents across the internet divided after a video of his 10-year-old daughter’s punishment for bullying went viral on Facebook.

Matt Cox is a father of four from Swenton, Ohio, who doesn’t mess around when it comes to teaching his children a lesson. After his daughter Kirsten got suspended from riding the bus for a second time as a result of her bullying another child, Cox decided he wasn’t going to give in to her request that he give her a ride. Instead, he would make her walk to school.

“This lovely lady is my 10-year-old daughter, who has for the second time this school year been kicked off of the school bus due to bullying another student,” Cox narrated the video of him trailing his daughter to school. “Friday when my daughter brought home her paperwork for her bus suspension, she said, ‘Daddy you’re gonna have to take me to school next week.’ As you see this morning, she is learning otherwise.”

The two-minute video showing Kirsten on her five-mile walk in 36-degree weather has been viewed over 15 million times. And naturally, parents have differing opinions about the punishment.

I guarantee she got the idea it was okay from you. YOU f***ed up raising her and now you’re trying to cop fifteen minutes of fame off your melodrama, bad parenting, and child abuse,” one person commented. Another said, “Parent however you wish, but is humiliating your child on social media necessary?”

Still, others praised the father for a job well done, writing, “I love how you followed her to make sure she was safe while still teaching a lesson. Tough love, indeed,” and, “I believe when she is older she will be thankful for this lesson you’ve taught her.”

Cox acknowledged that not all parents would agree with his choice of punishment, “but that is alright because I am doing what I feel is right to teach my daughter a lesson and to stop her from bullying.”

Ultimately, one parent agreed, “Your child, your choice of punishment.”

Cox didn’t immediately reply to Yahoo Lifestyle’s request for comment. However, he clarified to Toledo, Ohio, news station WTVG that the five-mile walk was actually broken up throughout Kirsten’s three-day bus suspension. Regardless of what others think, Cox ensures that the sanction was given in the hopes that children and parents alike start to take the threat of bullying more seriously.

“I just want the kids to know that words truly do hurt; they cut very deep and have lasting effects,” Cox told the outlet. “And I hope that parents hold their kids accountable.”

Bullied boy in Memphis gets help from classmates